For the sojourner seeking more than a tan and a t-shirt, the Literary Traveler will help you find the books, both fiction and non-fiction, films, music and art that form the cultural roadmap of a destination. 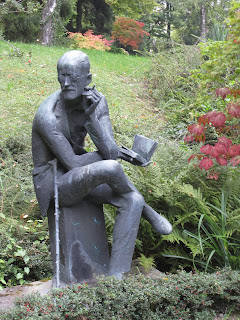 "James Joyce in Zurich?"
"How did he get here?  He was a Dubliner!"

That's what I asked myself when I happened upon his grave in a small and secluded cemetery on a hill outside of the city of Zurich, Switzerland.  Fluntern Cemetery is oddly located next to the Zurich Zoo, and seems an unlikely resting place for an Irish literary icon.
But it is a beautiful, restful and quiet place.
His wife, Nora Barnacle, insisted Joyce would have been quite content to be buried there, because he would be able to hear the lions roar. 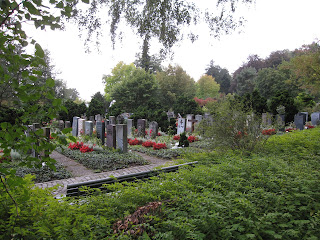 Joyce set all of his literary works in Dublin, but in 1904 he left that city, rather uncerimoniously, after quarrels, drinking bouts and debts complicated his life.  He and Nora eloped to the  continent, and, with the exception of a few short return visits, gave up Dublin as his home.

Joyce spent the years from 1915-1919 in Zurich, living in 7 different houses, and completing his pivotal work, The Portrait of the Artist as a Young Man.  It was here he met Ezra Pound who introduced him to Harriet Shaw Weaver, who became his patron and supported him financially for many years, allowing him to work on his writing without fear of abject poverty.

In 1920, the Joyces moved to Paris, but James Joyce returned frequently to Zurich for operations on his eyes and to seek treatment for his daughter, Lucia, from Carl Jung.  Jung thought both father and daughter were schizophrenic. He said that "Lucia and her father were two people heading to the bottom of a river, except that he was diving and she was falling."
The Joyces moved back to Zurich in 1940 to escape the Nazis, and in January 1941, James suffered a perforated ulcer, fell into a coma, and died.
So here he is, in this green and quiet place far from home.  Beside him lies his wife Nora, who died ten years after, and his son George, who died in 1976. 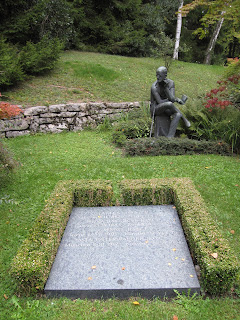 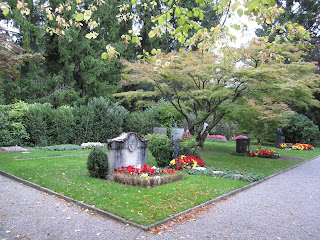 James Joyce is, however, sincerely loved and appreciated by Zurich.  The Zurich James Joyce Foundation   keeps his memory alive.
In the early seventies, Jury's Hotel in Dame Street, in the old part of Dublin, put up for auction the Victorian interior of Jury's Antique Bar. Joyce had frequented this bar and it is mentioned in his works ("Barmaid in Jury's" in Ulysses). The interior was brought to Zurich, where it was reopened in Pelikanstrasse as the James Joyce Pub in 1978. In the next year it served as official meeting place for participants of the 7th International James Joyce Symposium, thus connecting Joyce's name once again with the Bahnhofstrasse, which had already featured in a poem he had written in 1918.
The Zurich Foundation also bought Fritz Senn's collection of Joyceana -- probably the most comprehensive of its kind in Europe - when it was auctioned off.
Today the foundation holds readings and conducts tours of Joycean places in Zurich.
If you want to get close to Joyce in Zurich, book a room at the design hotel Hotel Zuerichberg and you can sleep close to the Irish bard, but in lovely style.  The hotel is elegantly contemporary, with terraces overlooking the city and an intimate bar that Joyce would have liked. 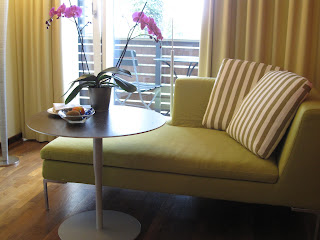 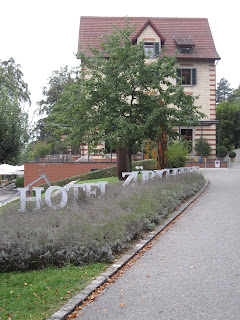 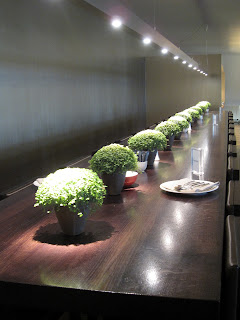 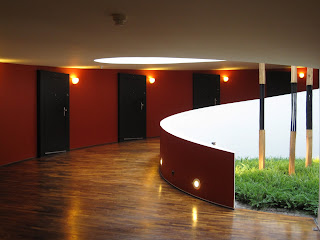 You can arrange tours of Joycean Zurich through the Zurich James Joyce Foundation.  In the meantime, tackle The Portrait of the Artist as a Yound Man, as a prelude to Ullysses.  It will take you a while, but these are two books that changed the face of contemporary literature.  And the Joycean language play is intoxicating.
Posted by Unknown at 12:12 PM